All my questions are about service animals: 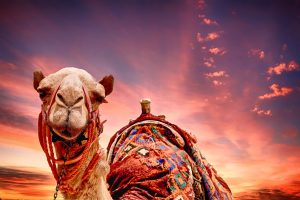 Welcome to the first step on our adventure towards understanding the Americans with Disabilities Act! (Yes, this tour will be conducted by this adorable camel) (his name is Herbert)

First, we will begin here, in this simple (but classy) blog, with a bite-sized (think complimentary airplane snack) summary of the ADA.

The American’s with Disabilities Act was signed into law in 1990 by George H. W. Bush and was amended in 2008. It protects any individual with a physical or mental impairment from discrimination based on disability. Under this law, Americans with disabilities are guaranteed equal opportunity in employment, education, public accommodations, transportation, government services and telecommunications.

So, fasten your seatbelts (they come standard, with the camel), and follow the link!

Welcome to Creative Commons: Part II. I didn’t feel like the slideshow presentation from Part I was a suitable creation for a CC license. So, I have this beaut (beaut…butte….rock puns)  shown above. It is an image of the rock formations at Monument Valley in Utah.

Licenses I Did NOT Choose:

Chad the Teacher is also Geology enthusiast Chad the Geology Enthusiast looking for images for his blog “All About Rocks: A Geology Blog.” He comes across “Monument Valley” by Chelsey Z. Because The image is licenses as CC-BY-NC, he is able to use the image in his blog as long as he provides an attribution for the photo.

Chad decides to use his skills at photomanipulation to make the image more refined and to superimpose a super cute image of his labradoodle into the original image. Because the image does not have an ND license, he is able to do this. However, Chad thinks that his dank meme would look very lit on some collectable mugs. He decides to sell his “Fluffy the Labradoodle visits Monument Valley” mugs from his blog. This is in violation of the creative commons license assigned to this image which states that it is a noncommercial license. If I were to catch Chad, I would ask him not to sell his mugs, but perhaps he might give them out as lovely Christmas gifts to his friends and family. (I might also smash one because gonnit Chad, this is your second violation)

This work is licensed under a Creative Commons Attribution-NonCommercial-ShareAlike 4.0 International License.

This assignment called for the creation of a CC license for something created for this Digital Citizenship class.  I honestly didn’t have a whole lot of stuff to chose from for this assignment. So I decided to make a CC license for my copyright timeline, although I may come up with a Creative Commons: Part II (a sequel!) in order to do a better job. Does anyone even bother licensing slideshow presentations? Anyways, I chose CC-BY-NC-SA (wow, that’s a lot of letters) because….

I didn’t want an ND license because I would like the information on this slide to be used, perhaps in another presentation.

Chad is a teacher looking for simple timeline to teach his students about copyright. He wants them to be able to use it as a quick reference. Chad shares this slideshow, attributes it to the creator and provides his students with the link. All this follows the licensing of this product.

Chad the teacher believes that the lesson that he taught in that class is great and he wants to offer the lesson at a price on a website where teachers can sell lesson plans. He includes this slideshow as a part of the lesson plan he is selling. Chad is violating the CC license attached this slideshow by selling it. If I were to discover this violation, I would ask Chad to remove the slideshow from his lesson plan.

In my very first post, my “yawp,” I shared that I have a BA in English Literature and Iñupiaq Language, that the name of my blog is an Iñupiaq word (pronunciation podcast coming soon, I promise), and that Iñupiaq is my heritage language. So, for my example of fair use, I decided to use one of my passions which combines my two degrees: translation.

I have been translating since I was an undergrad freshman taking first year Iñupiaq. My translations have gotten better, but I’ve still got a ways to go. I like translations because,

I was incredibly nervous about posting this translation for several reasons. 1) I know my translation has mistakes (I think it’s fairly solid, but it’s still got mistakes and mistakes make me self-conscious). 2) This is a copyrighted song and even though I’ve learned about fair use, I still worry that my work doesn’t fall into those parameters.

However, after careful consideration, I believe this use of a copyrighted work falls under fair use. I will explain how using the four factors of fair use.

I have been jonesing super bad to make a music video for my translation. But in my first attempt at a rehearsal of this cover, I realized two things:

Plus, just the mention of the phrase ‘copyright-infringement’ still scares me. BUT….one day, I will create this music video for Iñupiaq language learners, for language teachers, and for fans of the awesome Adele.

I used the h5p plugin for WordPress to create this timeline. My intended audience would be secondary students who are studying history.

As a (unpublished) writer, I have a funny relationship with the concept of Intellectual Property.

On the one hand, I very much identify with the idea that there is nothing new under the sun and that we are influenced by everything and everyone we cross paths with. As a writer, I can cite Joan Kane, Shakespeare, and T. S. Eliot as influences without worrying about being accused of stealing their ideas. I can write a poem in the villanelle form without having to pay a royalty to whoever created this form

I also understand and support the desire for progress and the sharing of ideas for the betterment of humanity. Open software allows us to create and continue to create online content that is accessible to others. Leaving such works open and available to all leads to innovation.

But, there is the idea that a person who puts work into the creation of something, whether it is physical property or intellectual property, should stand to profit from their creation in some way. An author sells copies of their books, their intellectual property. Someone who builds a house either gets to sell it, or live in it.

There are many other factors that go into this. I think that one of the functions that IP laws serve is to protect creators from entities that would take advantage of the creation of others for their own profit, rather than for the benefit of all.

In this blog, I will focus one specific example of this.

For example, in November of 2015, a UK clothing designer called KTZ received backlash for a particular sweater in their line, shown on the right in the picture below.

The man on the left was an Inuit shaman from Iglulik, Nunavut, named Awa. The sweater retailed for around $845. There can be no doubt that the inspiration for this garment came from Awa’s design, it is very close to an exact copy. Ok, fashion designers take inspiration from many sources. So what’s the big deal? Well, according to a CBC article, the design was used without Awa’s descendant’s permission or awareness, which caused outrage from the family members. Furthermore, this particular design was not just a fashion choice made by Awa. He didn’t just decide to create a new fashion trend. Awa was a shaman, a religious leader in his community. According to great-granddaughter, Salome Awa, “[Awa] had a vision of being drowned and created the garment with the help of his family to protect him” (CBC). This garment was designed and produced for a spiritual purpose.

KTZ’s sweater design, as far as I could tell from research, was not the result of any sort of collaboration with the Awa family or the community they are from. Although a Vogue overview of that particular line cites the inspiration as coming from Inuit culture, that the designs (which also were inspired by A Clockwork Orange) were meant to evoke “droogs in the making—suburban kids at loose ends—being sent to rehab in the Arctic.”

The family was not offered any monetary compensation, although KTZ did issue an apology and pulled the garment from its line and out of stores.

This is not the first time such an appropriation has happened to an indigenous community. Within the past forty years, various indigenous communities from around the world have made various declarations supporting and protecting their intellectual property rights. In 2007, the UN adopted a Declaration on the Rights of Indigenous People. Article 11, Section 1 reads

Indigenous peoples have the right to practise and revitalize their cultural traditions and customs. This includes the right to maintain, protect and develop the past, present and future manifestations of their cultures, such as archaeological and historical sites, artefacts, designs, ceremonies, technologies and visual and performing arts and literature.

IP’s true intention is not only to protect the intellectual work of any person, it is also to protect the creator and their work from the power structures that would take advantage of them. Was it within the legal rights of KTZ to appropriate Awa’s design? Ummm…sure. After all, the design wasn’t patented according to Western law, and being from the early 20th century, if it were it would probably fall under public domain by now. But does that mean it was ethical? No. The historical trauma felt by many indigenous peoples, including the Inuit of Canada, makes the appropriation by KTZ especially unethical. Indigenous peoples have, for centuries, been the object of exoticism and abuse. Desired for their strange and intriguing arts but also despised and mistreated for their difference…and for their resources. This appropriation of Awa’s design perpetuates that abuse.

Learn about Awa’s story from these titles:

Across Arctic America by Knud Rasmussen (chapters 3 and 9)

The Journals of Knud Rasmussen, dir. by Zacharias Kunuk and Norman Cohn

United Nations Declaration on the Rights of Indigenous Peoples

Essential Elements of Digital Literacy: I and II